Working in the Legislature after law school gave John D. McCall exceptional insight into the legislative process, which would help him greatly throughout his career.  In 1913, the first year John D. served as Assistant Secretary to the Senate, the Legislature created the Board of Water Engineers to regulate appropriations of water.  During December of that same year, torrential rains brought terrible floods to Texas.  The Guadalupe, Colorado, Trinity and Brazos rivers were all out of their banks simultaneously, flooding approximately 3,000 square miles.  Residences and barns disappeared.  Entire families disappeared.  At least 177 people were killed.  Further flooding in 1921 killed approximately 169 people.

In the Brazos Valley, the damage cost caused by the flood of 1913 was estimated to be $3.5 million.  The Legislature responded by adopting and presenting to the voters for ultimate approval the Conservation Amendment to the Texas Constitution in 1917; the same year John D. served notice of impeachment on James E. Ferguson (who was replaced in office upon impeachment by William P. Hobby).  In 1923, the Legislature commissioned a survey of all the rivers in the state and an analysis of the flood and water problems of each.  In response to the results of that survey, the Brazos River Conservation and Reclamation District (now known as the Brazos River Authority, or BRA) was established by the Legislature in 1929, and was the first state agency in this country to be given jurisdiction over the waters of an entire river basin.  Its creation served as a pattern for subsequent actions by the state and federal government.  The BRA held its first meeting in 1929, and then two more in 1930.  However, the Legislature failed to appropriate funds for the new agency, and the unexpected death of its first general manager in 1931 led to an informal dissolution of its board of directors.

In 1935, the BRA reorganized and hired John D. as its general counsel and bond counsel.  John D. was charged with sorting out all the BRA’s legal issues and recommending whatever steps might be necessary to secure funding from both the state and federal governments.  BRA had developed an elaborate master plan to construct thirteen dams along the Brazos River and her tributaries.  In the ensuing years, John D. worked closely with a host of federal lawmakers, including Senators John Connally, Jimmy Phillips, Price Daniel, Lyndon B. Johnson, Speaker of the House Sam Rayburn, and Secretary of the Interior Harold Ickes, attempting to secure federal funding for BRA’s reservoir projects.  BRA’s first project was to be constructed in Palo Pinto County, in the so-called “Possum Kingdom” country, because it had the greatest potential for generating hydro-electric power.  In 1936, John D. and Millard Parkhurst brought a writ of mandamus against Texas Attorney General William McCraw, who had refused to approve $3,600,000 in bonds issued by BRA on ten different grounds of illegality, all of which were rejected by the Texas Supreme Court (126 Tex. 506).  Construction of Possum Kingdom Dam began in 1938.  In 1940, John D. and Millard successfully defended BRA in an action by landowners who had enjoined the impounding of the reservoir, reversing the rulings of the Palo Pinto County District Court and the Eastland Court of Appeals (135 Tex. 307).  In 1941, BRA authorized the construction of Lake Whitney, although construction did not actually begin until 1947.

In 1946, John D. was contacted by J.B. Thomas, president of Texas Electric Service Company, who had been working with E.V. Spence and Simon Freese on constructing a reservoir on the Colorado River to provide water to the Cities of Odessa, Midland, Big Spring, Colorado City, and Snyder.  Ultimately, John D. and Clarence Crowe facilitated the creation of Colorado River Municipal Water District (CRMWD), which bond-financed O.H. Ivie Reservoir, E.V. Spence Reservoir, and J.B. Thomas Reservoir, to provide a more reliable source of water for the people of West Texas.  In 1949, BRA authorized the construction of Belton Lake.

From 1949 to 1957, Texas experienced the worst drought in its history, now known as the “Drought of Record,” prompting the enactment of far-reaching legislation, much of which was drafted by John D. or with his assistance.  In 1949, at the request of Governor Allan Shivers, John D. served as Secretary of the newly created Water Code Committee, appointed by the Senate during the 51st Legislature.  John D. was one of the few persons other than elected officials appointed to the committee, which was organized to study the water laws of the state and propose new laws to address the state’s growing water shortage, along with flood control.  Beginning in December of 1949, McCall and the Water Code Committee traveled to Brownsville, Midland, Pecos, El Paso, Amarillo, Wichita Falls, and Stamford, to hold regional hearings, inspect surface water facilities and meet with local stakeholders.  In 1951, John D. was one of three men appointed by Governor Shivers to author the new Texas water laws. 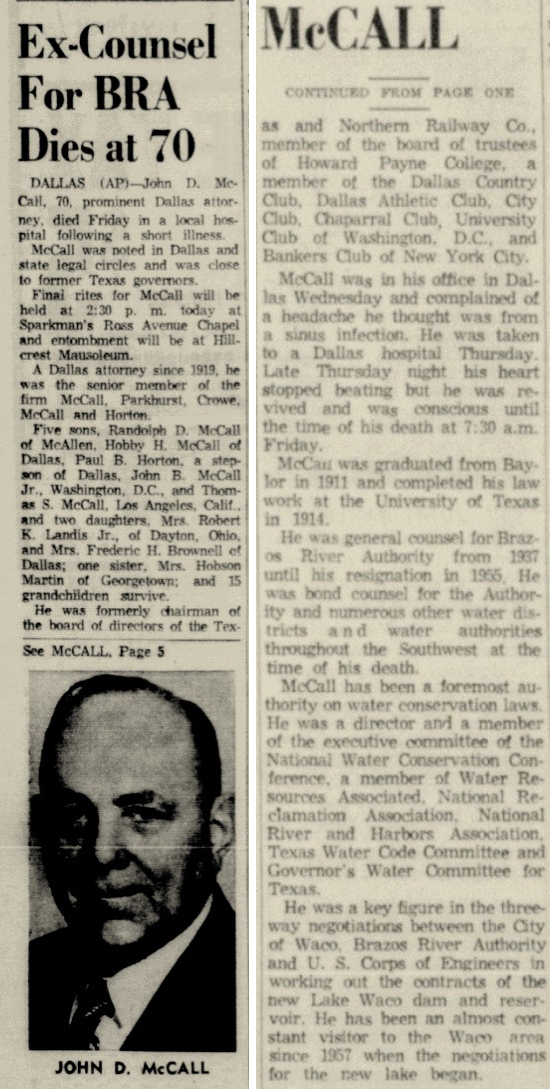 On May 29, 1951, McCall orchestrated simultaneous elections in the Cities of Farmersville, Forney, Garland, Mesquite, McKinney, Plano, Princeton, Royse City, and Plano, to approve the creation of the North Texas Municipal Water District (NTMWD) to provide water from the to be constructed Lavon Reservoir.  On December 5, 1953, a similar election was held to ratify contracts entered into by these cities to purchase water from NTMWD.  In November 1951, John D. served on the advisory committee for the first Water Law Conference held at the University of Texas at Austin, an event at which McCall continued to speak until the time of his death.  Based on the successes of CRMWD and NTMWD, John D. advocated for the creation of additional municipally-controlled, regional water districts as a viable means of financing the construction of new reservoirs throughout the state.  With McCall’s guidance, the Legislature began to authorize the creation of dozens of such districts to address the state’s water crisis.  McCall also drafted enabling legislation authorizing the issuance of contract revenue bonds by these districts, secured by ironclad contracts entered into with their constituent cities.  Such entities included Eastland County Water Supply District, Lower Rio Grande Authority, Northeast Texas Municipal Water District, Upper Leon River Municipal Water District, West Central Texas Municipal Water District, and many others.  In 1953, McCall drafted enabling legislation authorizing similar projects by river authorities, and in November 1953, the BRA launched a program wherein cities along its banks were invited to join together to pledge contract payments to BRA to finance the construction of new reservoirs to serve their water needs.

In 1957, the Texas Water Development Board was created by legislative act and constitutional amendment.  John D. served as bond counsel on the first statewide bond election to authorize the issuance of $200 million in State of Texas General Obligation Water Development Bonds, the proceeds of which would be used to make loans to political subdivisions.  In April 1958, McCall met with stakeholders at City Hall in Liberty, Texas to adopt a Master Plan for the construction of three new reservoirs by the Trinity River Authority, which plan was immediately submitted to the Board of Water Engineers for approval.  In 1959, John D. again addressed the annual Water Law Conference in Austin.  In his speech, entitled Interbasin Transfers of Water, John D. argued for the prudence of transferring water from one basin to another, particularly where water would be underutilized and lost to the ocean if not transferred to another basin with greater demands for water.