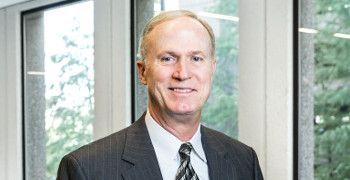 George Charles (Chuck) Kobdish is of counsel in the Dallas office. Chuck has spent the majority of his 46+ year career in public finance with McCall. Although he primarily served as bond counsel for school districts and river authorities, he also served a diverse collection of other governmental issuers and been involved in drafting legislation for various clients.

In addition to acting as bond counsel, Chuck actively promoted educational awareness of municipal law by serving as a panelist for various organizations. He has also been called to give expert advice to the Senate Interim Committee on Public Finance and has worked with the Senate Education Committee and other members of the Legislature on school finance issues.

Before joining McCall, Chuck served as Assistant Attorney General in the Public Finance Division of the Texas Attorney General’s Office from 1974-1976, where he was responsible for reviewing and approving all types of governmental obligations issued in the State.

Former Member of Board of Directors; Current (and former) President, Serra International—Serra Club of Dallas

The University of Texas at Austin McCombs School of Business, B.B.A., 1971 (with honors)